Never before has a DAVIS Acoustics loudspeaker been so polished, so sophisticated or so expected!

Stellar is the most elaborate floor standing  model of the DAVIS Acoustics range of loudspeakers, since its creation. Almost 4 years were necessary for its elaboration… Work on the speakers, work on the design, work on the crossover…

we explain you everything!

Since 1986, DAVIS acoustics has made a name for itself by producing numerous models, more or less expensive, finished or in kit form, which have left their mark: NIKITA, KRISTEL, MV 15, OLYMPIA ONE, CESAR, MATISSE… What do they have in common? An inimitable sound characterized by a beautiful medium and an opening that makes you want to tap your foot.

The STELLAR, designed from A to Z by Olivier VISAN (engineer, son of the creator of DAVIS Acoustics and designer of all the models of the brand for nearly 20 years), ensures a continuity in the sound philosophy of the DAVIS products, by adding to it, for this model, a dose of magic, thanks to the whole of the embedded technologies.

You liked one of our products? You should love STELLAR.

“The name STELLAR is actually a double tribute:

On the one hand, it comes from INTERSTELLAR, Christopher Nolan’s cinematic work with music composed by Hans Zimmer. It is a movie that has deeply marked me. By the singularity of its scenario and the stressful and bewitching effect of its soundtrack. There is also this story of complicity between a father and a daughter… Sublime! Olivier VISAN.

On the other hand, STELLAR pays homage to the GALAXIE 200 speaker, a model from SIARE*, created at the end of the 70’s, beginning of the 80’s, which already had a “spatial” sound… I knew this loudspeaker very well because it was proudly displayed in our living room for more than 20 years. It is undoubtedly at the origin of my taste for music.

From Galaxie to Stellar, there is only one step, but a giant step!”

* Michel VISAN, creator of DAVIS Acoustics, has worked for more than 15 years at SIARE as technical director. We owe him many drivers like the 31TE, the 19 TSP or the TWZ (mythical drive units that he made evolve at DAVIS) and many loudspeakers of the time (GALAXIE, DELTA, FUGUE…). 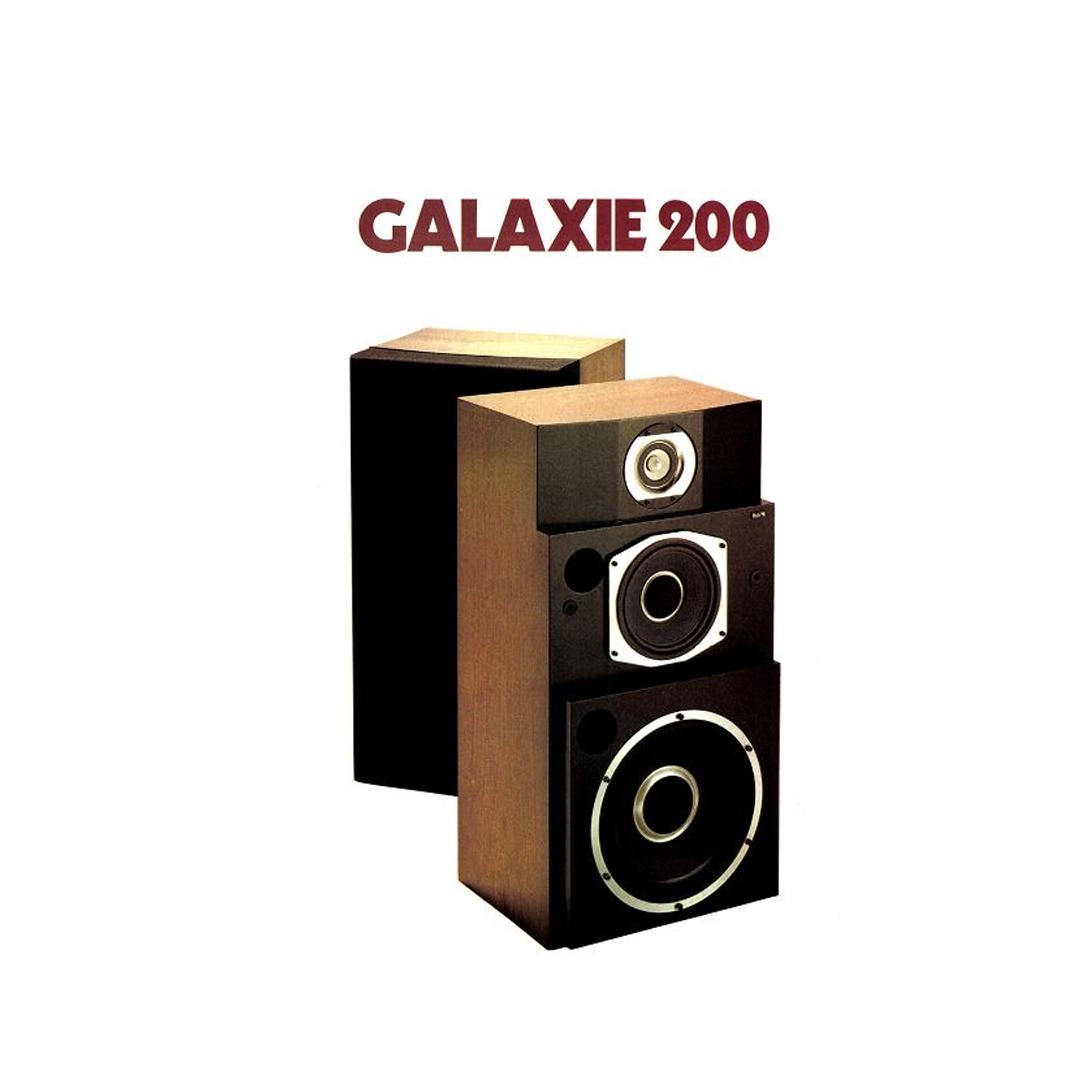 The technique according to DAVIS :

No artifice, no industrial revolution… the STELLAR has been designed from technical solutions that have proven their worth: noble and suitable materials for the membranes (carbon fiber, Kevlar and aramid fibers), for the magnetic motors (TiCoNAl or ferrite), for the internal wiring (pure copper, surrounded by silver), or for the structure of the enclosure (reinforced Medite).

By choosing the materials of its diaphragms, but also the quality and the dimensioning of the magnets used or the diameter, the impedance, the height of the winding or the quality of the moving coil support, DAVIS is one of the rare manufacturers to be able to decide on all the technical solutions for the creation of a loudspeaker.

As a driver designer, before being a loudspeaker designer, DAVIS masters all the steps in the manufacturing of the STELLAR.

So, it is quite natural that STELLAR uses only 3 drivers to retranscribe the whole audible bandwidth (and even more!):

– a woofer with carbon fiber membrane,

– a medium driver with TiCoNAl motor,

By limiting the number of emissive sources to 3 transducers, we increase the clarity of the message.

The choice of the tweeter was therefore made on a cone tweeter.

In the 70’s, Michel VISAN (creator of DAVIS Acoustics) then technical director at SIARE designed the TWZ, a tweeter which used, not a “traditional” dome, but a cone in cellulose pulp, then in aramid fiber.

Very quickly, at DAVIS, the TW26K was created. It was then supported by the double ferrite version (found in the KRISTEL!), then by the TW26G cellulose pulp model. In 2009, with the launch of the KARLA, it was the turn of the TW20K2FR. A model with a smaller diameter coil, able to go up in higher frequencies.

In short, the brand new tweeter of STELLAR is the umpteenth version of a transducer well known by the fans of the brand. To increase its transparency, an important work was carried out on the membrane / coil bonding. The result: an almost perfect linearity between 2500 and 25 000 Hz, a very beautiful transparency and especially an energy that a dome tweeter cannot retranscribe.

On the other hand, the geometry of this tweeter resembles that of our medium speaker, it facilitates the fusion of the medium and high registers.

Finally, the aramid fiber used is also a woven material, like the membranes of the other loudspeakers in the cabinet. This continuity in the materials of our membranes ensures a natural extension of the timbres, throughout the bandwidth.

The “medium” frequencies are once again entrusted to a “Kevlar™” cone driver. This 17 cm (6.5″) diameter transducer, with its decompressed aluminum chassis, is also an improved version of our 16 GKLV6M. This time it has a powerful TiCoNAl magnet, which generates an ultra fast acceleration of the diaphragm, allowing a transparent and therefore very realistic sound. The voice coil is mounted on a kapton support*.

It’s hard to beat that for voice reproduction!

* Kapton is a polyimide film (imide-based polymer) developed in the late 1960s by DuPont that can remain stable over a wide temperature range, from -269 to 400 °C – source wikipedia 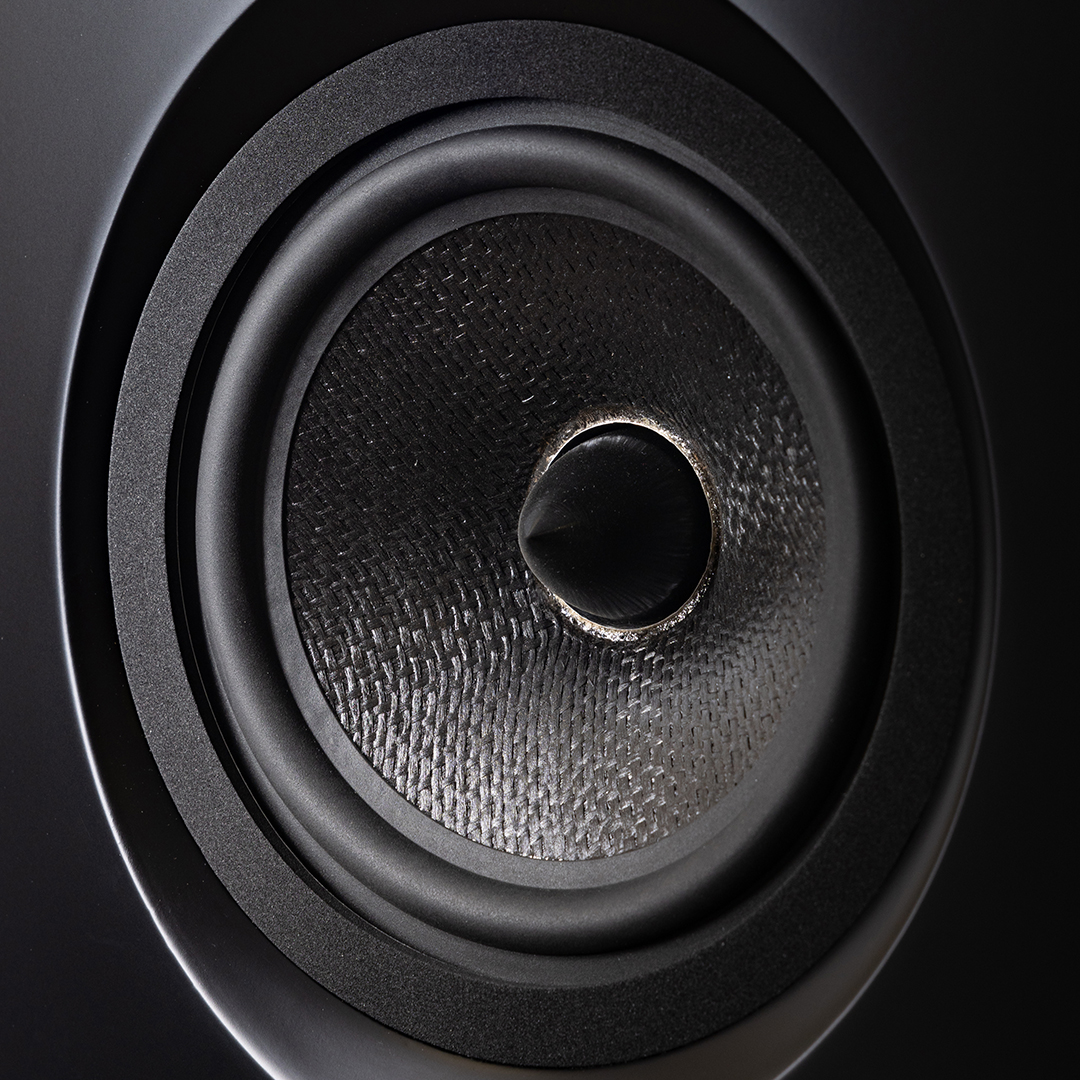 Fast and firm for the low frequencies

For the bass register, we wanted to get as close as possible to a firm and fast bass.  The 25cm is an ideal speaker for this type of bass. Its membrane is big enough to move a lot of air, but still light enough to receive strong accelerations. The material of the membrane chosen: carbon is a must at DAVIS.

Once again, it is Michel VISAN who, for the first time, worked on this material to make a hyper rigid cone. The first tests were made with flat carbon sheets, which were cut in several pieces, like the first phonographs.  Later on, he used thermoformed carbon fiber sheets… and we know what happened ( 38 RCA 15, 31 TCA 12…).

For this custom model, we make field plates of 10 mm thick, machined to the hundredth of mm. The winding is long, thus ensuring perfect control of the movement of the moving part, even during long excursions. The centering and return elements (small folds suspensions and spider) have ideal stiffness constants to go down in frequency, but also to contain its displacements.

A titanic work on the filtering…

It is the first time that one of our realizations took so much time to materialize.

Several dozens of filters were made, from components among the most transparent of the market. Numerous in-depth listening sessions followed and resulted in a crossover that pays a beautiful tribute to our “medium” transducer.

Each of the loudspeakers is thus used in its own frequency range. It has little or no effect on the other drivers, because DAVIS has used steep crossovers of up to 24 dB/octave. This results in small overlap areas between each speaker. The listening experience is surgically precise. It remains nevertheless very musical to avoid any auditory fatigue. The levels are studied to obtain a linear curve of frequency response.

In addition to that, the impedance curve is particularly linear, without accidents. It facilitates the association with many amplifiers. Of course, it is never under 4 ohms, never ! 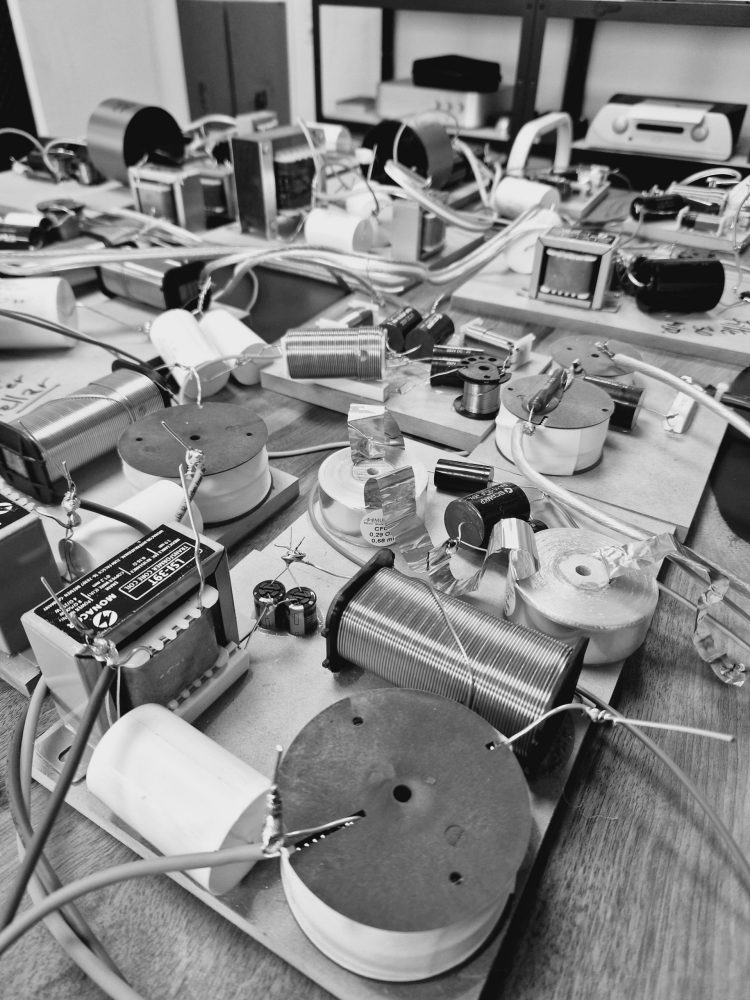 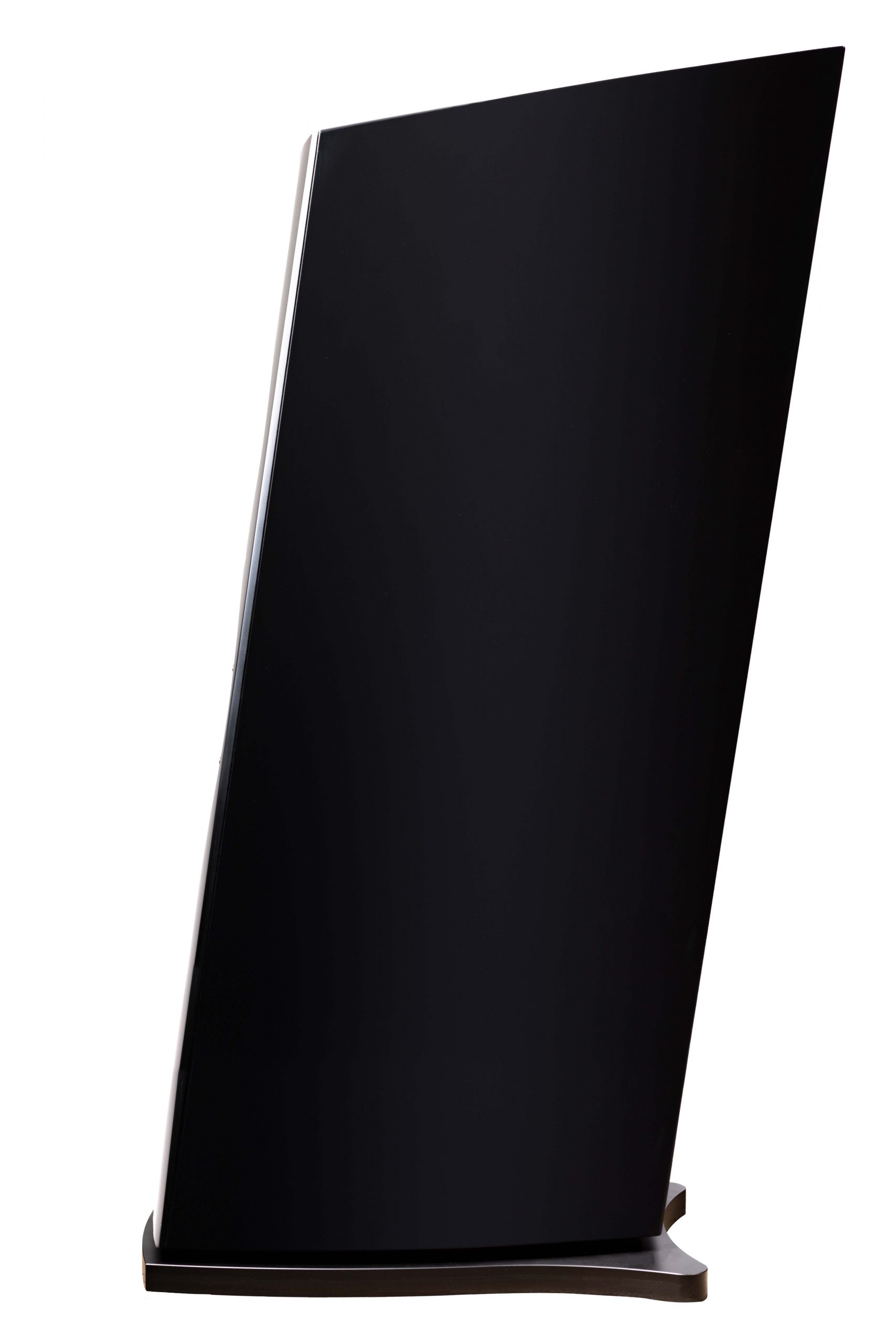 Placing such speakers in a living room…

Due to their size and characteristics, STELLARs should be carefully placed in a room of at least 40 m2. Ideally, we recommend a minimum distance of 70 cm from the walls (rear and side), to reduce the influence of the room on the final sound. They are delivered with decoupling spikes that should be screwed under the base, depending on the acoustics of the room.

STELLAR is a monolith, slightly tilted backwards, and proudly placed on its cast iron base, which perfectly follows the curve of its sides. Equipped with height-adjustable decoupling spikes machined to 1/100th of a millimeter, it weighs about 20 kilos to ensure ultimate stability.

Behind this simple shape, there is also the interest of aligning the speaker coils on a vertical axis, to ensure an ideal phasing of the 3 transducers.

The product is available in a timeless and discreet black finish (matte front and lacquered sides), which will suit all interior styles (classic or modern). However, STELLAR is also available in the finish of your choice: metallic coating, color gradient, marble effect… let your imagination guide you in deciding the unique shade of your speakers.

UNIQUE ! Because you are too. 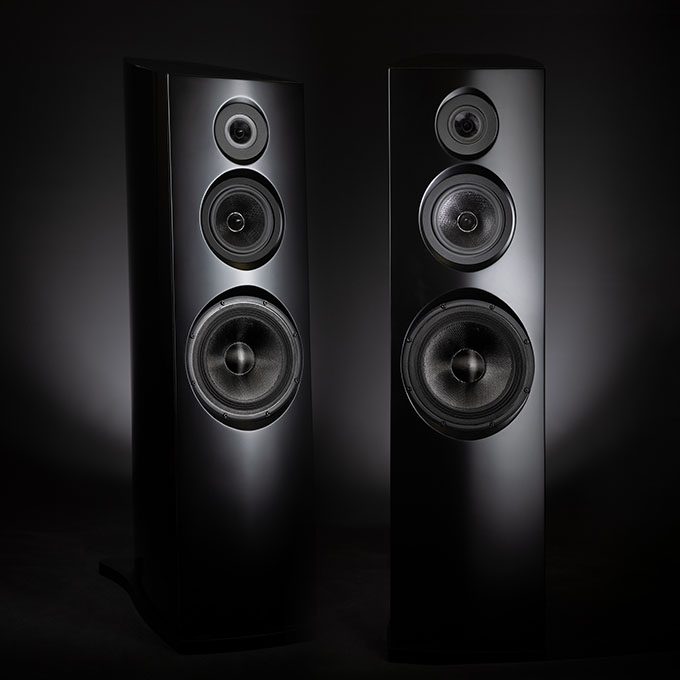 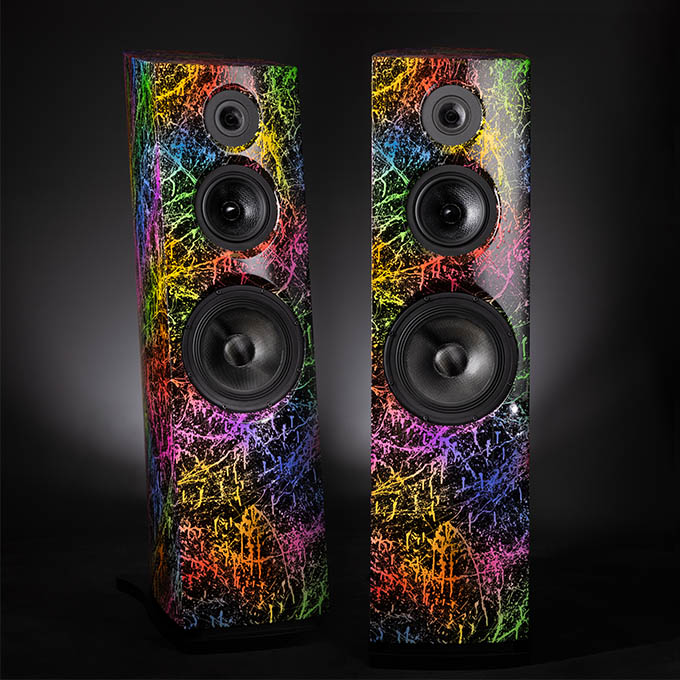 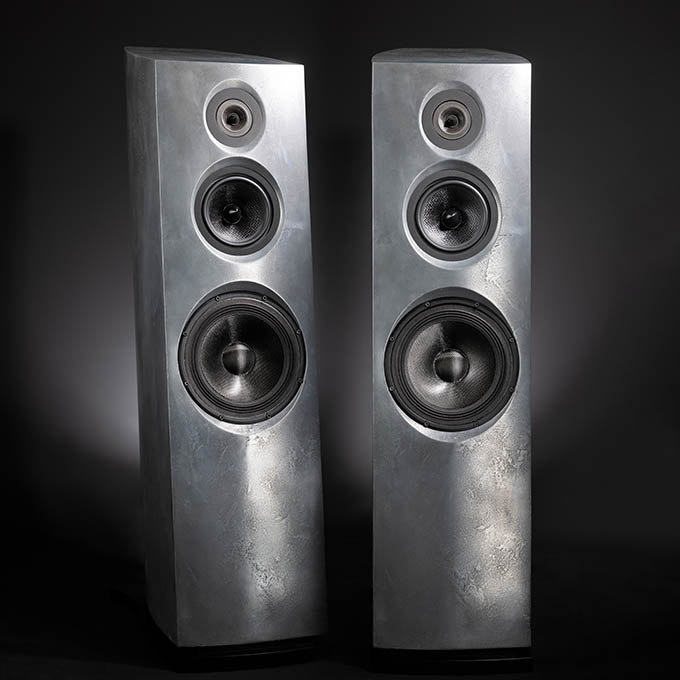